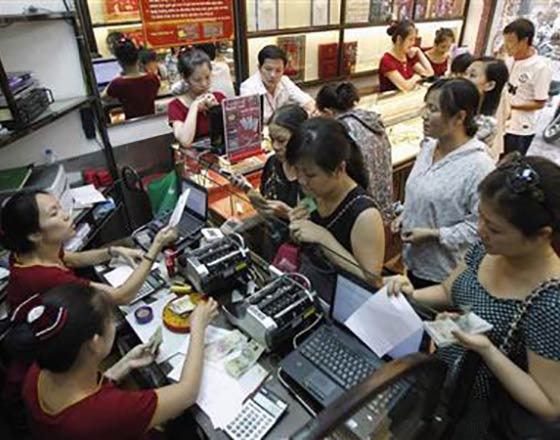 The Trump effect has already started even though he's not in the Oval Office yet.

The Vietnamese dong fell against the U.S. dollar this morning after the greenback hit a 14-year high following the Federal Reserve’s move to lift interest rates.

The dong fell to 22,799 per dollar at major banks today, hitting the bottom of the trading band of 3 percent around the mid-point set daily.

The central bank on Thursday set the official mid-point rate at 22,135 dong per dollar, or 11 dong weaker than the official rate set yesterday.

In a closely watched decision, the U.S. central bank, better known as the Fed, raised rates to a range of 0.50-0.75 percent late Wednesday local time and signaled more increases in 2017.

Reuters reported that the dollar soared to a 14-year peak against a basket of major currencies following the Fed's 25 basis-point interest rate increase.

The Vietnamese dong has been on a losing streak since mid-November amid growing anticipation that the Fed would lift interest rates following President-elect Trump’s promises of tax cuts and increased infrastructure spending.

Global investors believe that Trump’s promises to pump more money into the U.S. economy will raise inflation and lead to higher interest rates which in turn will strengthen the dollar.

Last month, the State Bank of Vietnam said it was ready to stabilize the dollar/dong exchange rate by tapping foreign reserves which had reportedly increased to a record high of $40 billion, enough to cover three months of imports.

Meanwhile, gold on the global market dipped its lowest level in more than 10 months to $1,143.4 per ounce.

Gold prices in Hanoi quoted by Saigon Jewelry Co., which is reportedly one of very few local gold refiners to be allocated an import quota, dropped by VND300,000 per tael this morning to a selling price of VND36.85 million ($1,623.3). Each tael of gold is equivalent to 1.2 ounces.