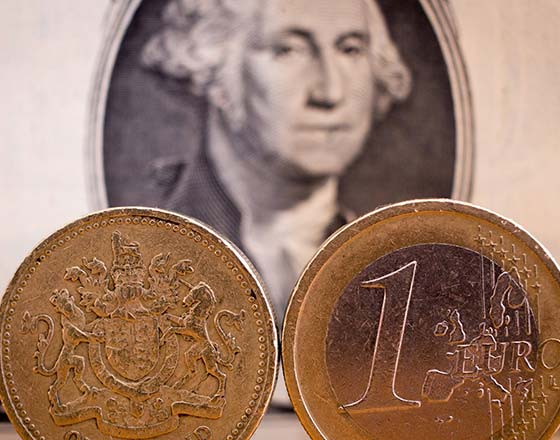 Speculation that the UK could avoid a hard Brexit from the European Union, and fears that Donald Trump might snatch a last-minute victory in the race for the White House, have helped sterling register its biggest weekly gain against the US dollar in seven years.

The pound's respite from its recent heavy falls on the foreign exchanges continued on Friday when it put on a cent against the US currency to trade at $1.2558 — its highest level for four weeks.

Sterling's rally came despite labor market data from the US, which strengthened Wall Street's belief that official borrowing costs in the world's biggest economy will be raised before Christmas.

Currency dealers paid less interest than usual to the 161,000 increase in non-farm employment last month and the 0.4% increase in hourly earnings, focusing instead on the knife-edge battle between Hillary Clinton and Trump for the presidency.

The pound has been rising since the start of the week after evidence of a narrowing of Clinton's opinion-poll lead and amid evidence from forward-looking business surveys that the UK economy was set to grow robustly in the fourth quarter of 2016.

Sterling then received a double-boost on Thursday when the high court ruled that the government could not trigger article 50 to leave the EU without the approval of parliament, and the Bank of England announced that it had abandoned plans for a second post-referendum stimulus.

"We're seeing a bit of a relief rally now that the worst-case scenario of a unilateral hard Brexit has been deferred, and markets can start focusing on other factors (like) the US presidential election," said CMC analyst Michael Hewson.

Investors believe turbulent market conditions will continue, with a government appeal against the high court ruling scheduled for next month, and some analysts weighing up the chances that Theresa May will call an early election to push ahead with Brexit.

"Just as markets were looking forward to getting the US election out of the way, this week has seen speculation that another UK election could be right around the corner," said Paul Hollingsworth, chief UK economist at the consultancy Capital Economics.

The pound ended the week almost 3% higher against the dollar - its strongest performance since October 2009 — but remained 16% lower than it was before the Brexit referendum in late June.

Sterling's depreciation has been helpful for the City's main stock market yardstick — the FTSE 100 — since many of the companies included in the index have dollar earnings which are flattered by a drop in the pound.

This week's rise in sterling was accompanied by the biggest drop in the FTSE 100 since January. A fall of 97 points on Friday to 6,693 points brought the cumulative loss over the week to 301 points — a 4.3% decline. The FTSE 250, which includes more domestically focused companies, posted a smaller 1.8% weekly fall.

The last set of US labor market figures before Tuesday's election showed a slightly smaller increase in non-farm payrolls than the 175,000 rise Wall Street had been expecting.

But analysts said the improvement was solid enough to persuade the US central bank, the Federal Reserve, to raise interest rates at its next meeting in December. The Bureau of Labor Statistics revised up jobs growth for August and September by a combined 44,000 and said annual wages growth had edged up from 2.7% to 2.8% — a seven-year high.

"It seems that the only remaining obstacle to the Fed hiking in December would be a significant adverse financial market reaction to the US presidential election," said Chris Williamson, chief business economist at the consultancy IHS Markit.

Squabbling between Saudi Arabia and Iran has sent the oil price down, as tension between the near neighbours threatened to derail talks aimed at cutting production by the Opec group of oil-producing countries.

Riyadh is reportedly threatening to turn the screw on Tehran before this month's crucial Opec meeting by increasing its own output to push prices even lower.

Saudi Arabia produces up to 10.7m barrels per day (bpd) at the moment, but Opec sources said it had threatened to open the taps much further.

"The Saudis have threatened to raise their production to 11m bpd and even 12m bpd, bringing oil prices down, and to withdraw from the meeting," one Opec source told Reuters.

The cost of a barrel of Brent crude dropped to $45.02 before recovering to $45.42, down 2%, after Opec's secretary general, Mohammed Barkindo, denied Saudi Arabia had made any threats.