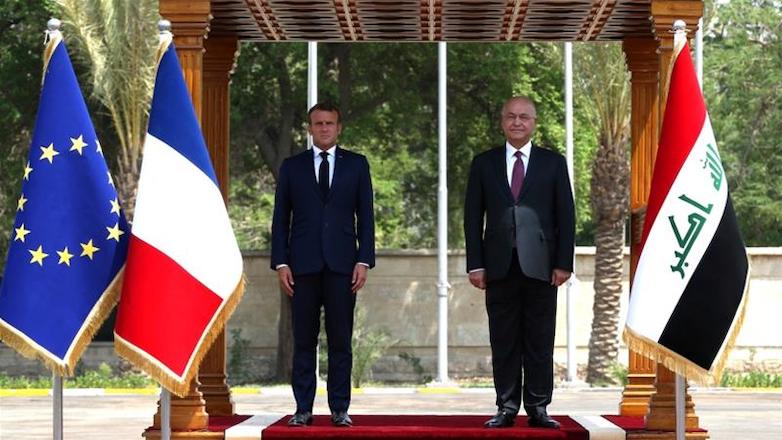 Salih told Macron the Iraqi leadership is looking forward to a future where Baghdad will claim an 'essential and a central role in the region'. [The Presidency of the Republic of Iraq Office/Handout via Reuters]

French President Emmanuel Macron has pledged support for Iraq and said the main challenges facing the country are Islamic State of Iraq and the Levant (ISIL, also known as ISIS) group fighters and foreign interference in its affairs.

Macron is the first head of state to visit the Iraqi capital since Prime Minister Mustafa al-Kadhimi, Iraq's former intelligence chief, formed a new government in May.

"We are here for and we will continue to support Iraq," Macron said at a news conference in Baghdad with his Iraqi counterpart Barham Salih.

"Any foreign intervention may undermine the efforts exerted by you as a government."

Iraqi officials should continue to share the vision of restoring "Iraq's sovereignty," he said, adding that this is a "very significant enterprise not only for Iraq, but also the entire region".

"I would like to reiterate that France totally supports the Iraqi state and institutions."

Macron had earlier said he was heading to Baghdad "to launch an initiative alongside the United Nations to support a process of sovereignty".

Later on Wednesday, the French leader met al-Kadhimi during his day-long trip, which comes amid a severe economic crisis and coronavirus pandemic that has put a huge strain on Iraqi economy and politics. He is also expected to meet Nechirvan Barzani, president of the semi-autonomous northern Kurdish region.

Al-Kadhimi was selected by parliament in May to head a government that would guide the country towards early elections and has called for one to be held in June 2021.

His predecessor Adel Abdul Mahdi quit under pressure from protests against corruption and foreign interference in December last year.

Early elections are a main demand of anti-government protesters who staged months of mass demonstrations last year and were killed in their hundreds by security forces and gunmen suspected of links to Iran-backed armed groups.

Salih told Macron the Iraqi leadership is looking forward to a future where Baghdad will claim an "essential and a central role in the region".

"This area must be in a peace and stability situation, and the base of this stabilities proceed from the strengthening of Iraq's role as a competent country with sovereignty," he said.

President Salih said he looked forward to a longer visit by Macron in 2021, and al-Kadhimi said he hoped France and Europe as a whole could help "restore stability" to the rocky region.

"We do not want to be an arena for confrontations but a zone of stability and moderation," al-Kadhimi said in a news conference, adding that France and Iraq would sign energy agreements in the future and deepen military cooperation.

"We talked about a future project, using nuclear energy to produce electricity and peaceful projects, which will be under the supervision of the International Atomic Energy Agency ... which will create jobs and address electricity shortages."

After a United States-led invasion toppled former president Saddam Hussein in 2003, Iraq was ravaged by waves of sectarian conflict that culminated in ISIL capturing swaths of the country six years ago.

At the same time, the country has been caught for years between its two main allies, Iran and the United States, a balancing act that has become increasingly tortured since Washington's withdrawal in 2018 from a multilateral nuclear deal with Tehran.

France is among the European nations that remain key backers of the 2015 agreement.

Al Jazeera's Dorsa Jabbari, reporting from Baghdad, said Macron's visit was an "important step", especially since the country is caught between two allies who are at odds with each other.

Al-Kadhimi, who is backed by the US, assumed office on May 7 when Baghdad's relations with Washington were precarious. Like previous Iraqi leaders, he has to walk a tightrope amid the US-Iran rivalry.

The January assassination of Iranian General Qassem Soleimani and top Iraqi militia leader Abu Mahdi al-Muhandis by the US in Baghdad prompted demands by Shia legislators that US forces leave Iraq.

Al-Kadhimi visited Washington last month, where he held talks with President Donald Trump. He said his administration is committed to introducing security reforms as rogue militia groups stage near-daily attacks against the seat of his government.

Other crises for al-Kadhimi include slashed state coffers in the crude oil-dependent country following a severe drop in prices, adding to the woes of an economy already struggling amid the pandemic.