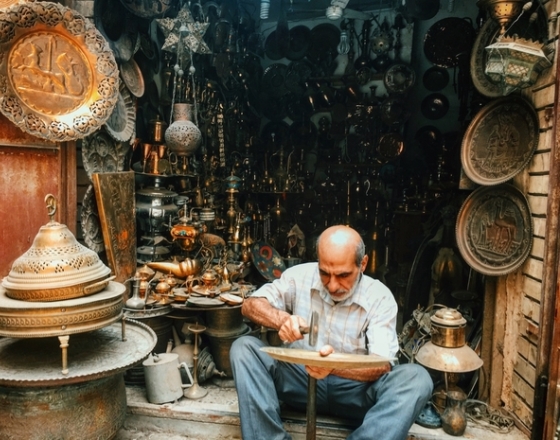 With the implementation of neoliberal policies likely to put further strain on Iraq’s poorest, the International Monetary Fund (IMF) has provided Iraq with a loan of $5.34 billion on condition of shrinking the government.

In wake of this news, Moody’s, a US based credit rating company, has lowered "Iraq’s fiscal and balance of payment challenges" despite the fact that Iraq’s donor dependency will be increasing. The ongoing security crisis within Iraq is also adding to economic instability and it is vital for Iraq to address both to maintain peace and reduce poverty.

According to the US Energy Information Administration, Iraq has the fifth largest proven oil reserves in the world and therefore it is understandable that Iraq has developed much of its infrastructure around the petroleum sector. However, with collapsing oil prices and ongoing insecurity within Iraq, the country's resource curse is evident now more than ever. The problem is not unique to Iraq: following the collapse of copper prices, Zambia’s economy failed with the implementation of the infamous structural adjustment programmes (see Aid and Poverty Reduction in Zambia by Oliver Saasa or Dead Aid by D Moyo).

Conditional IMF loans to the Iraqi government will not be the answer to Iraq’s ongoing economic crisis, just as the IMF’s "economic reform package" failed the Iraqi economy in 2004.

Since the end of the first Gulf War, Iraq has seen its economy rapidly collapse. It is now difficult to imagine a time when Iraq’s dinar was worth two British pounds, as was the case pre-UN sanctions on Iraq. Recurrent wars and international pressures through UN sanctions resulted in Iraq’s economy plummeting. In 1989 Iraq’s GDP was valued at $38 billion but by 1996 the GDP was standing only at measly 30 per cent of this value. UNICEF famously stated that the sanctions directly resulted in over 500,000 deaths of Iraq’s innocent children, a price worth paying according to then US Secretary of State Madeleine Albright.

Following the US-led "liberation" or "occupation", depending on which side of the fence you stand, Iraq’s economy continues to struggle. Iraq, using the Human Development Index which takes into consideration income per capita, is ranked 121st globally. Although officially leaving Iraq in 2011, the neoliberal reforms implemented by Paul Bremer’s Coalition Provisional Authority (CPA), famously referred to as Bremer's 100 orders, remain entrenched in Iraq’s constitution, much to the benefit of Western economies and no elected Iraqi officials have the authority to undo these reforms.

These reforms included maintaining corporate tax at a low rate of 15 percent, privatisation of Iraqi state-owned facilities and granting foreign contractors immunity from Iraqi legislation, including private security companies. Within days of Saddam Hussein’s grip on Iraq breaking, the Ministry of Oil in Baghdad was secured by the US armed forces and reopened. The Chilcot Inquiry itself highlighted the important role oil interests had in the lead-up to the war in ensuring British oil companies would have a share of Iraqi oil production.

Paul Bremer implemented four orders under George W Bush’s supervision when he was head of the CPA in Iraq. These orders included "the full privatisation of public enterprises, full ownership rights by foreign firms of Iraqi businesses, full repatriation of foreign profits… the opening of Iraq’s banks to foreign control, national treatment for foreign companies and…the elimination of nearly all trade barriers" (see Antonia Juhasz’s Ambitions of Empire: The Bush Administration Economic Plan for Iraq). Such a sudden reform to the Iraqi economy caused a massive collapse of the Iraqi infrastructure.

The freeing up of the market destroyed what was left of Iraq’s self-sustainability. Similar reforms have repeatedly been attempted in lower income countries to frequent dire consequences to each country but significant benefit to other countries. The first country to be affected by similar reforms was Chile, following Milton Friedman's policies to focus on copper production (as Iraq is being asked to focus on oil production today) and maintain a free market over import substation. Any economic growth in Chile was short lived, when the reforms and donor dependency resulted in the Latin American debt crisis. In 2005 similar proposals at the Doha Round organised by the World Trade Organisation resulted in countries walking out in protest that any such reforms were to the benefit of Western states.

Walking around Baghdad, it is now near to impossible to find any Iraqi goods for sale in the streets. Following the US-led invasion, a once-proud manufacturing nation has been shackled with strict Ricardian economics, focusing merely on that which it is supposedly good at, a failing oil production industry. The opening up of the market has left the wealthy entrepreneurs in Iraq to search for the cheapest options for production.

In Iraq the only flights fully booked in or out of the country are those going to China, where businessmen make deals to bring the cheapest possible products into Iraq. Even the Al-Safafeer market, once a proud centrepiece of Iraq’s manufacturing industry, has been affected by the importing of cheaper products from abroad. Al-Safafeer market was world famous for selling brass products designed and embroidered with beautiful patterns by the merchants themselves.

Walking the street, all you would be able to hear was the banging of metal as the designers carved out their trade. Sadly today, the bronzework that is sold all comes from China and is decorated by machines. The market owners speak reminiscently of the days in the 70s and 80s when they would see tourists from all over the globe traipsing the very same markets in search of souvenirs to take home. Not only is trade being lost, but a beautiful skill too, and with that, jobs and livelihoods have been taken away.

I have personally spent days walking around the Shorja Market, the largest market in Baghdad, in search of clothes made in Iraq and have found it to be an impossible feat. I found clothes made in war-torn Syria for sale in Iraq but not Iraqi clothes. I was eventually able to hunt down an Iraqi factory owner, a man who used to make clothes in the time of Saddam, who told me his factory has been shut for years.

Why would he spend the time and effort in production when the cheaper, more profitable option would be to import garments from China, he explained. This reality again takes money away from Iraq’s economy and reduces employment opportunities.

Pre-2003 imports in Iraq reached a low of $2.682 billion per year. Staggeringly, now the imports figure is over $45 billion per year, a 2250 per cent increase on pre-war figures.

Iraq’s agriculture has been massively impacted by post-inasvion reforms. Pre-2003, Iraq was agriculturally self-sufficient. Up to 2002 it remained self-sufficient in fruit and vegetables. The farmers in Iraq had developed a centrally controlled, self-functioning seed industry by the sharing of seeds through farmers. Following the 2003 invasion, the agriculture system was destroyed and the National Seed Bank was no more. By 2005 only 4 percent of Iraq’s agriculture was grown from their own seeds.

Of Bremer's unchangeable 100 orders, order 81 banned Iraqi farmers from saving, sharing and replanting harvested seeds. Secondary to the freeing up of the market, international agriculture companies took heed of this opportunity and began selling Iraq seeds. Among these multinationals were Monsanto, a company that provides genetically modified seeds which do not produce further seeds, increasing dependence. Furthermore, of the six types of seeds that were provided for Iraqi farmers, three produced wheat for pasta, a dish not found on the streets of Baghdad and therefore used primarily as an export product to feed Western diets whilst Iraqi children die of starvation.

When picturing Iraq, an image of palm trees and dates instantly comes to mind. However, for a country so rich in palm trees, even the date industry has taken a fall following the freeing up of the market. Cheaper dates from Iran and Saudi Arabia now flood the streets of Iraq, making it difficult to find one of the few products Iraq is traditionally famous for.

Iraq is struggling with rising unemployment rates that are now at 11 percent, more than double that of higher income countries such as the US and the UK. According to the United Nations Development Programme, nearly 23 percent of Iraqis live below the poverty line with an income of less than $2.2 per day.

Nonetheless, the neoliberal reforms enforced through conditional loans by the Bretton Woods institutions have resulted in the shrinking of the government and outsourcing of services to international firms, whereby cheaper labour can be imported into Iraq, despite many Iraqis struggling to find employment. It is not an uncommon sight to find taxi drivers on the streets of Baghdad hanging their university degrees by their car windows to show that they have been unable to utilise their expertise.

The nation of Iraq is full of history and culture. Iraq has recently had its famous marshes deemed a UNESCO World Heritage Site. There are plenty of tourism opportunities in the safer regions of Iraq, if not for international tourists, for local tourists. However, either due to government corruption or genuine fear for security, access to these sites are limited to a select few from the government elite. The tourism industry, previously an essential part of Iraq’s economy, needs to be re-promoted.

Nonetheless, despite the falling oil prices, Iraq's income from oil is not small. Iraq has been bitterly affected by corruption on a large scale. According to Transparency International, Iraq is the eighth most corrupt country globally. It is not uncommon in Iraq for billions of dollars - billions which could be used to develop public services and stabilise the economy - to go missing either through bureaucracy or plain theft.

By late 2014, nearly 70 per cent of Iraq's spending was to fund a massive public payroll as well as food and energy subsidies. This public payroll is not reflected in high-quality public services and achieves little for the citizens of Iraq, highlighting the desperate need for a restructuring of the Iraqi government.

Over the last six months, the citizens of Iraq have been holding regular anti-corruption protests throughout the country over the minimal reforms achieved by the government. For Iraq to even begin considering empowering the economy, fighting corruption must be made one of the priorities of the government.

It is important to recognise that Iraq has been suffering ongoing violence for over a decade. As of 2015 military expenditure was at 4.26 per cent of Iraq's GDP. This does not include the police expenditure, with police also participating in the war on the self-proclaimed Islamic State (IS). Nor does it include the massive loss in productive life as a result of the innocent civilians caught in the clashes.

Furthermore, ongoing conflict demotivates any investment in Iraq. Frequently, even within more protected regions in Iraq, entrepreneurs hesitate to open businesses. All it takes is one, sadly not uncommon, car bomb to detonate to destroy the millions spent on developing the business. Iraq not only suffers from economic instability but is also afflicted by a profound security instability, with the two problems deeply interlinked. For economic stability to be maintained, national reconciliation is crucial.

Iraq is a country that has been affected severely by ongoing conflicts and deep sectarian divisions. The shock to the economic infrastructure by sudden changes following the collapse of Saddam Hussein’s regime has put further strain on Iraq’s growing and young population, where over 50 percent of the population is under 19 years old.

Iraq needs investment to develop its own economy and shift away from donor dependency as well as dependency on a collapsing oil market.

Import substitution industrialisation, a model which advocates the replacement of foreign imports with domestic products, has previously been implemented in other regions to varying degrees of success. It is unfeasible to ban all imports to a nation such as Iraq. However investment policies focused on the local economy must be promoted to kick-start the once powerful economy of Iraq.