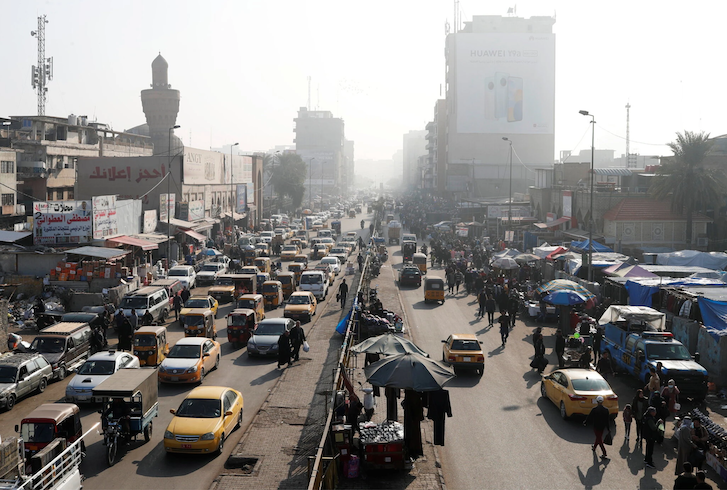 BAGHDAD — In the wholesale market of Jamila, near Baghdad’s sprawling Sadr City neighborhood, a merchant, Hassan al-Mozani, was surrounded by towering piles of unsold 110-pound sacks of flour.

His troubles are a ground-level indicator of what economists say is the biggest financial threat to Iraq since Saddam Hussein’s time.  Iraq is running out of money to pay its bills. That has created a financial crisis with the potential to destabilize the government — which was ousted a year ago after mass protests over corruption and unemployment — touch off fighting among armed groups, and empower Iraq’s neighbor and longtime rival, Iran.

Iran in the past has taken the opportunity posed by a weak Iraqi central government to strengthen its political power and the role of its paramilitaries within Iraq.

With its economy hammered by the pandemic and plunging oil and gas prices, which account for 90 percent of government revenue, Iraq was unable to pay government workers for months at a time last year.

Last month, Iraq devalued its currency, the dinar, for the first time in decades, immediately raising prices on almost everything in a country that relies heavily on imports. And last week, Iran cut Iraq’s supply of electricity and natural gas, citing nonpayment, leaving large parts of the country in the dark for hours a day.

“I think it’s dire,” said Ahmed Tabaqchali, an investment banker and senior fellow at the Iraq-based Institute of Regional and International Studies. “Expenditures are way above Iraq’s income.”

Many Iraqis fear that despite Iraqi government denials there will be more devaluations to come.

“Everyone is afraid to buy or sell,” said Mr. Khalaf, who turned to business when he couldn’t find a job with his degree in sociology.

Mr. al-Mozani, 56, the merchant in the Jamila wholesale market, imports flour from Turkey in dollars, until recently selling it for about $22 per sack. In response to the currency devaluation, he raised the price to $30.

A restaurant manager who popped in to ask about the new price of flour, Karam Muhammad, said there was not much demand for the flour. Restaurants, he said, have been mostly empty because of the pandemic and the financial crisis.

In a stall off a narrow, winding alley of the Shorja market, one of Baghdad’s oldest, Ahmed Khalaf sells the smallest luxuries: nail polish, plastic hair barrettes, colored pencils.

Even during the pandemic, by midmorning the stalls in Shorja market would normally be thronged with shoppers buying food staples and household goods. But last week the aisles were nearly empty.

“Our customers are mostly government employees, but as you can see they’re not coming,” said Mr. Khalaf, 34.

While the currency devaluation took most Iraqis by surprise, the economic and financial crisis has been years in the making.

Public sector salaries and pensions cost the government about $5 billion a month, but its monthly oil revenue recently has reached only about $3.5 billion. Iraq has been making up the shortfall by burning through its reserves, which some economists say are already insufficient.

The International Monetary Fund concluded in December that the country’s economy was expected to have contracted by 11 percent in 2020. It urged Iraq to improve governance and reduce corruption.

For 18 years oil revenue has propped up a system in which the government wins support by awarding ministries to political factions, which are given almost free rein to create jobs. Iraq’s Civil Service has tripled in size since 2004. Economists estimate more than 40 percent of the work force depends on government salaries and contracts.

The financial crisis could put the brakes on this corruption-riddled patronage system.

“Every government, they’ve managed to buy out more and more but that buying of loyalty, that buying of acquiescence is over,” Mr. Tabaqchali said by phone from London.

The high public payroll has left little spending on infrastructure. Iraq’s economy has also been hit by the coronavirus pandemic, with many workers in the already weak private sector losing their jobs.

Mr. Tabaqchali and other economists said the devaluation was a difficult but necessary step in helping Iraqi businesses. With the cost of imports rising, Iraqi goods such as farm produce can more easily compete.

Adding to the misery has been Iraq’s limited ability to pay Iran for electricity and natural gas. Iraq is not allowed to transfer cash to Iran, but instead it sends food and medicine in exchange for natural gas and electricity. Iran says it is owed the equivalent of more than $5 billion.

Part of Iraq’s debt was created by its inability to pay, but the lion’s share, about $3 billion, remains frozen in an Iraqi bank, while Iraq struggles to comply with U.S. sanctions against Iran, Iraqi officials said.

The sanctions, aimed at forcing Iran to accept stronger restrictions on its nuclear program and to curb its support for foreign militias, have blacklisted its banking system.

“For the Iraqis, it is difficult because the mechanism to pay them is almost nonexistent because obviously the Americans are monitoring the situation very closely,” said Farhad Alaaldin, chairman of the Iraq Advisory Council, a policy research institute.

Mr. Alaaldin and others said the financial crisis could lead to renewed protests and struggles between armed groups to control Iraq’s increasingly limited resources.

That Iraq, one of the world’s largest oil producers, cannot reliably supply electricity to its citizens and has to import electricity is symptomatic of the dysfunction that led to antigovernment protests last year and brought down the previous government.

Iraq’s energy infrastructure has suffered from three devastating wars since the 1980s, destroying refineries and power plants. But since the American-led invasion of Iraq overthrew Mr. Hussein in 2003, corruption and incompetence have prevented Iraq’s government from fully restoring electricity.

In addition, although Iraq is awash in oil, most of its electricity plants run on natural gas. Iraq has vast natural gas reserves but has not invested heavily in developing its gas industry. And until the Trump administration levied additional sanctions on Iran, importing electricity gas from Iran was the easiest solution.

For the millions of Iraqis who cannot afford electricity from private generators, the power cuts and rising prices have been a double blow.

Haifa Jadu, 55, who had come to Shorja market to buy sesame seeds and walnuts, said she and her husband, a retiree who is blind, had simply done without electricity for large parts of the day.

“We used to pay money to a generator owner, but we haven’t bought power for four months because he increased the price,” she said. She said the walnuts she bought a month ago for about $3.50 a pound were now almost $5 and out of reach.

The government has proposed sweeping measures to try to bolster the economy, including tax increases, in a plan now before Parliament. But many politicians are counting on the prospect of increased oil prices this year to delay passing what economists say are urgently needed reforms.

Until that happens, unemployment is expected to grow as about 700,000 young people enter the job market each year. With few jobs to go around, they are likely to join what has become a permanent underclass of the poor and dispossessed.

Near Shorja market, Amar Musa, wearing a black mask and a military-style olive green coat, had set up artificial Christmas trees and tinsel garlands to sell on the busy main street to his Orthodox Christian customers, who celebrate the holiday in January.

Mr. Musa, 45, graduated from a technical college with a mechanic’s diploma but says he has never been able to find a job in his field. Standing next to a white Christmas tree with a deflated mylar Santa impaled on its metal branches, he explained he had a shop that went out of business and now drives a taxi.

Like many Iraqis, he also writes poetry. Asked to recite one of his poems, he pulled a cigarette out of a package, broke it in half and threw it on the ground.

“I am like a cigarette,” he said. “I burn and like a butt I would be thrown away. Do not talk to me about the homeland. We are poor and our homeland is the grave.”