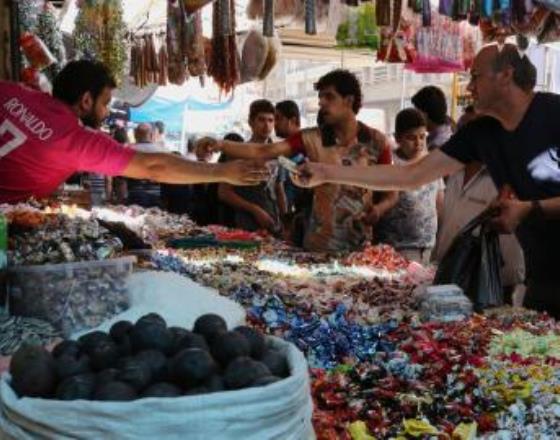 Let's start on the frontline of every faltering economy: the grocery store. In a Baghdad shop lined with baskets of spices and rose petal tea, owner Osama al-Hassani is measuring out roasted, salted beans.

"Is that enough?" he says to a customer.

It's not very much. The customer says he'll actually take a bit less. And the shopkeeper complains that this is the situation now. He says he used to have 13 workers in his store and now he's only got two. Business has been down for months. His customers are squeezed and worried

"My salary was cut 10 percent," says Alaa Aziz, a university professor. His wife, a schoolteacher, also had her salary cut. They're just belt-tightening for now, nothing drastic.

But they think it's going to get worse and they're probably right.

Everything seems to be working against the Iraqi economy. The government is waging a costly war with the Islamic State while dealing with falling oil prices, millions of displaced citizens and staggering costs for reconstruction of cities ruined by fighting.

The International Monetary Fund calls this a double shock. In 2014 Iraq lost a lot of its territory to ISIS and had to spend on start fighting back and looking after millions of civilians driven from their homes in the north and the west of the country.

At the same time, oil prices started to fall. Oil is now going for around $30 a barrel, down from about $100 when the prices began to crash in the summer of 2014.

To help pay for the war, the U.S. has offered loans to cover defense equipment, but it doesn't cover salaries either for soldiers or the millions of Iraqis on the government payroll for jobs or pensions.

About 4.5 million workers are on the government payroll, with another 3.7 million receiving pensions. And people have come to expect other benefits like food rations and cheap gas.

Looking To The Government

Saleh, the adviser, says people are used to depending on the government.

"This is oil country, OK. A tax holiday, free lunch, everything free even the electricity for free," he says. "This is the mentality of the Iraqi people at this moment. Believe me, it's very difficult to change them. We need time to educate them."

For now, the government is doing a complicated shuffle with money, essentially eating into its reserves of foreign currency just to keep paying those salaries. But Iraq will run out of savings by sometime next year at this rate.

Experts say Iraq needs reforms that would include large numbers of workers moving from the government payroll to the private sector. But Iraqis don't see it that way.

At a recent demonstration in Baghdad, protesters chanted against corruption. They say the country's economic problems aren't due to low oil prices, but because the political class is made up of thieves.

Kadhim Faraj, a retired teacher, is asked what will happen if the government cuts salaries.

"I think that the demonstrations will continue and the government will be in a corner very tight," he says.