Can the White Paper save Iraq from its dark days? 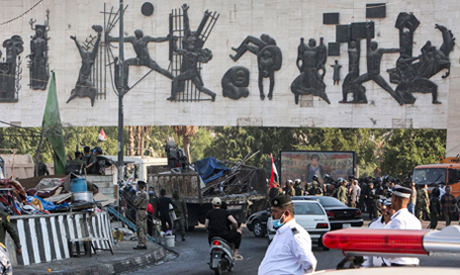 Vehicles pass through Baghdad's central Tahrir Square as it reopens in a sign of easing tensions a year after the launch of anti-government protest movement (photo : AFP)

Even without the Covid-19 pandemic, the battered Iraqi economy would be in dire straits. Low energy prices, financial mismanagement, and endemic corruption have all pushed the oil-rich nation to the brink.

In terms of its devastating effects on most Iraqis, the country's current economic predicament is at its most dire since the oil boom in the 1970s that ushered in a period of financial resources for development.

Due to financial constraints, the Iraqi government has not been able to pay civil servants on time for months, threatening cuts in the earnings of millions of employees and creating a vicious cycle of recession and worsening living conditions.

With new Prime Minister Mustafa Al-Kadhimi taking office in May amid a national crisis and promises of reform, the question has been whether his government will truly change course for the better or whether Iraq will continue with business as usual.

Last month, Al-Kadhimi unveiled a plan for legislative and administrative reforms to the nation’s finance system, setting out a roadmap to overhaul the Iraqi economy and address decades-old financial challenges.

The plan, billed as the White Paper, outlines a strategy for the government to tackle its balance of payments crises through massive spending cuts in the public sector and increasing revenues.

The strategy identifies two overarching strategic objectives: a short-term one to deal with the current budget deficit and a medium term one to put the government’s finances on a sustainable path.

The paper anticipates that the short and medium-term objectives and associated reforms will require between three to five years to implement, after which Iraqis can choose the economic direction of their country.

Iraq’s Finance Minister Ali Allawi, a former World Bank employee and a businessman believed to be the mastermind behind the plan, declared that the strategy had strong backing from the International Monetary Fund (IMF) and the G7 group of nations.

Representatives of the IMF, other multinational financial institutions, and G7 governments met in London last month with their counterparts in Al-Kadhimi’s government to launch the Iraq Economic Contact Group (IECG).

The initiative signals the involvement of Al-Kadhimi’s international backers in Iraq’s economic restructuring drive, which builds on financial support from the IMF, western governments, and probably also multinational commercial banks.

Iraq’s financial malaise is not new, and it largely goes back to the flawed economic policies of the governments that came to power following the collapse of the regime of former dictator Saddam Hussein in the US-led invasion of the country in 2003.

Iraq’s economy, one of the most successful in the Middle East before it was adversely affected by Saddam’s wars and regional instability, was severely damaged by successive governments in the post-invasion era because of flawed policies and a system of bad management, sectarian rent-seeking, cronyism, and unbridled corruption.

That system has unraveled in recent years, fueling an economic collapse that has been exacerbated by a plunge in oil prices, over-spending, inefficiency, and the theft of public resources by Iraq’s ruling oligarchs.

Millions of Iraqis took to the streets for months starting on 1 October last year to express their anger at high unemployment and dire public services and demanding that those involved in the endemic graft be brought to justice.

Capitulating to the protestors, the newly installed Al-Kadhimi government promised a package of reforms that included improving the country’s dysfunctional financial system and generating more revenues from non-oil resources.

Yet, six months after Al-Kadhimi assumed office, the country seems to be at a crunch point financially, with the government cutting most public spending and warning that it will not be able to pay the salaries of millions of public-sector workers.

To tackle the salary problems, Al-Kadhimi is now suggesting that the Iraqi parliament allows the government to borrow billions of dollars from state-owned commercial banks funded by the Central Bank of Iraq.

In June, parliament approved a bill that allows the government to raise $5 billion of external borrowing and 15 trillion Iraqi dinars of internal borrowing to address the financial deficits in the country.

Lawmakers say the government is seeking some 36 trillion Iraqi dinars, about $35 billion, more to meet the deficit in the 2020 budget and to pay for salaries, pensions, and essential services such as healthcare and subsidies.

Critics say the country’s debt is already too high and that its government cannot be trusted to manage more. They also warn that such intensive borrowing could lead to the collapse of the country’s financial system.

They believe that Iraq’s current economic problems go beyond the state budget crisis and the decline in oil prices and that they undermine the government’s ability to prop up an economy battered by inefficacy, corruption, political turmoil, and now the new coronavirus.

All the forecasts indicate that Iraq’s economy is in bad shape and that it is getting worse. It needs a drastic structural overhaul, critics say, in order to avoid economic collapse and consequent political chaos.

However, Al-Kadhimi’s government hopes that its new white paper will help to remedy Iraq’s financial meltdown and set out the conditions for the country’s economic revival.

In addition to achieving sustainable financial stability through a set of measures to reduce the deficit and reform spending, the paper aims at increasing the effectiveness and improving the performance of Iraq’s economic sectors.

While it identifies main areas of reform, the paper lacks details about implementing the strategy and the timeline required to carry out a process it says may well require between three and five years to implement, however.

But the main problem with the plan is that it draws heavily on the standard recommendations of the IMF and the World Bank for restructuring ailing economies in developing nations as preconditions for lending.

Among the objectives the paper sets out that are in line with the requirements of the two institutions are fiscal regulation, currency devaluation, restructuring the banking system, and privatisation.

Ahead of the parliament’s endorsement of the white paper, the government opened talks with the IMF to discuss financing by the Fund under its rapid financing instrument (RFI) emergency credits.

There has been no word from the IMF on progress in the talks, but relations between the Fund and Iraq have not always been good because of controversial IMF conditions and financial policy advice.

In 2017, the IMF halted a $5.34 billion loan to Iraq as a result of disagreements over the federal budget and the Fund’s proposals for the Kurdistan Regional Government›s (KRG) share of the loan that the Iraqi government considered to be too interventionist regarding sovereign financing plans

Fears about IMF conditions for new loans are endemic, and many critics believe that IMF and World Bank-driven reforms have often been counterproductive, in Iraq’s case making the situation worse instead of better.

Examples include cutting salaries and devaluing the Iraqi dinar, both policies which could be devastating in a nation that relies largely on oil revenues, rents, and imports of foodstuffs from abroad.

Iraq’s economic outlook could be bleak, but the measures foreseen in the new white paper, a disguise for IMF-driven financial reforms, are likely to deepen Iraq’s social and political problems.

Given the deadlock in the country’s political process, sectarian divisions, and continuing instability, the paper will most likely meet resistance from Iraq’s ruling elites, parliament, civil society, and public, each for certain reasons.

Disastrous as Iraq’s situation now seems, the country needs political stability and fundamental changes in its dysfunctional governance before it embarks on large-scale changes to turn this rentier state into a development-based economy.

In war strategies, this is called “escaping forward” – in other words, when a situation is desperate, attack instead of retreating. But in the Al-Kadhimi government’s case, it seems to be too powerless to advance while unable to find a way out.