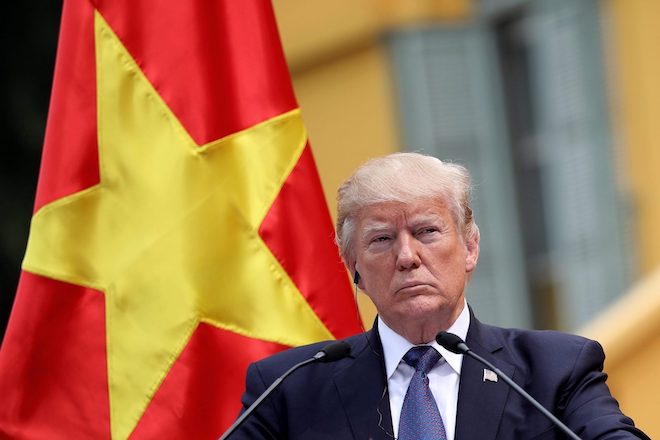 US President Donald Trump speaks with a Vietnamese flag in the background in a file photo. Image: Twitter

The US government plans to investigate Vietnam for alleged currency manipulation in a charge that could lead to major trade sanctions against the Southeast Asian nation, according to a September 30 Bloomberg report that cited three sources familiar with the situation.

The new inquiry comes after the US Treasury Department placed Vietnam on a watchlist of ten potential currency manipulators in January; Malaysia and Singapore were also included in this list.

Then, in August, the US Departments of Commerce and Treasury concluded that Vietnam had manipulated its currency in at least one trade case involving the export of tires.

Washington could decide as early as next week that sanctions should be imposed on imports from Vietnam, though it remains unclear whether they would be enforced before the US presidential election on November 3, and if they would only be applied on a select few import products.

Sanctions could come in the form of new tariffs on imports and new federal rules passed this year in the US that allows the Commerce Department greater leeway to raise duties in specific response to currency manipulation.

President Donald Trump’s administration has already imposed tariff sanctions worth billions of US dollars on Chinese imports as part of the US-China trade war. In June last year, India lost its preferential access to US markets on a trade dispute.

The Trump administration has been particularly hostile to partners with which the US has large trade deficits, meaning those countries that export far more goods to American markets than they import from US producers.

In June of last year, Trump lashed out at Vietnam as “even worse” than China on trade, around the same time that his administration slapped duties on Vietnam’s steel products over suspicions that Chinese-made products were simply being rebranded as made in Vietnam to circumvent US sanctions imposed on Chinese exports.

Hanoi responded by tightening regulations on the origins of its imported industrial inputs.

The deficit was US$34.8 billion as of July this year, signaling that it could be higher by the end of 2020 than previous years, even with the Covid-19 pandemic’s impact on global trade.

Maintaining a bilateral trade surplus with the US of at least $20 billion over a 12-month period is one of the factors the US Treasury uses to assess whether country’s are manipulating their currencies.

But when Vietnam was again placed on the US Treasury’s watchlist for currency manipulation in January, the only apparent reason at the time was because of the sizeable trade deficit.

By comparison, when Vietnam was first put on the watchlist in mid-2019, it was because of this as well as Hanoi having a current account surplus higher than 2% of gross domestic product (GDP).

Hanoi has attempted to bring down its trade surplus with the US on several occasions, seen in the recent signing of expensive and potentially less-than-essential deals to import US-made goods, including aircraft, in an attempt to placate Trump’s trade wrath.

But some see Trump’s targeting of Vietnam as short-sighted, particularly at a time the former adversaries’ ties are growing on strategic matters.

For starters, Vietnam isn’t China. Vietnam-made goods accounted for just 3% of US imports last year, far below the 17.5% from China. GDP per capita in Vietnam is just two-fifths of China’s.

Moreover, Vietnamese exports to the US have rapidly risen in recent years precisely because of the trade war, which has prompted factories and supply chains to relocate from China to Vietnam because of its better trade privileges with the US.

Indeed, this “decoupling” of supply chains away from China was one of the latent intentions of the trade war. Washington thus should have been pleased when major multinationals like Apple, Nintendo and Google partially relocated their operations from China to Vietnam last year.

In the first 11 months of 2019, Vietnam’s electronics exports to the US rose 76% as a direct result of tariff pressure put on Chinese-made goods.

To date, Vietnam is seen as one of the few winners of the US-China trade war. Before the pandemic hit in January, forecasts suggested that Vietnam’s economic growth would be higher in 2020 than 2019 because of a steady uptick of production relocations from China.

As such, anti-China officials in the Trump administration should arguably consider the growing trade deficit with Vietnam as a trade war success, a realization of Washington’s stated long-term ambition of “decoupling” from the Chinese market.

Punishing Vietnam for this augmented trade deficit would in some sense be responding to a situation that it created, analysts argue.

Another reason why the US should arguably tread lightly with Vietnam – and one imagines officials from the State and Defense Department are lobbying their colleagues in the Treasury to do so – is because Vietnam has emerged as a major US geopolitical ally.

Washington has backed Hanoi’s over Beijing’s claims to disputed territory in the South China Sea, and the US navy has engaged in many freedom of navigation exercises in those waters.

In March, the USS Theodore Roosevelt aircraft carrier docked in Danang, marking only the second time that a US Navy ship has docked in the Southeast Asian country since the Vietnam War ended in 1975.

In sight of those strategic interests, it still seems unlikely that Washington will impose the harshest sanctions possible on Vietnam for alleged currency manipulation. More likely, a few select types of goods will be hit with tariff sanctions.

In July, the World Bank forecast that Vietnam’s GDP is likely to grow by just 1.5% this year, compared to around 7% mark in previous years. More recent private forecasts put growth potentially higher at 3%, one of the few positive growth forecasts in the region.

That’s still problematic for Hanoi, which is desperate to boost its economy as fast as possible over the next decade to keep pace with demographic issues. As would be US trade sanctions over what amounts to less than 3% of all US trade but nearly 20% of Vietnam’s.