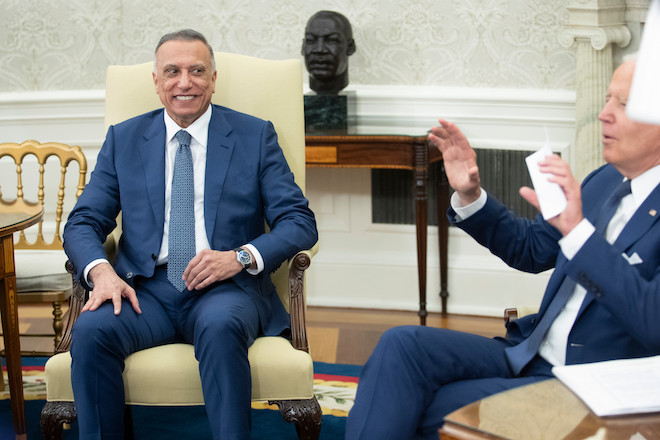 Last week, the Turkish news site Ahval reported that the Iraqi government invited Turkey’s President Recep Tayyip Erdogan to a regional security summit that would also include Iran, Syria, Saudi Arabia, Jordan, Kuwait, and the European Union. Since then, other news outlets have reported that the guest list also includes the United Arab Emirates, Qatar, and Egypt. The meeting, which is scheduled for late August, is just the latest effort stretching back to 2019 on the part of Iraq’s leadership to be a constructive force in the Middle East.

This marks quite a change. Before domestic instability, violence, and corruption in the aftermath of the American invasion became the dominant storylines about Iraq, the media, analysts, and government officials in the United States focused on the country as a source of regional instability. Not without good reason, of course. Iraqis played a role in trying to overthrow King Hussein of Jordan in September 1970. A decade later, Iraqi President Saddam Hussein launched military operations that would become the Iran-Iraq War that lasted eight years and killed anywhere between one million to two million people. And then Saddam invaded Kuwait in August 1990, declaring it Iraq’s 19th province.

Now, Iraqi Prime Minister Mustafa al-Kadhimi, who gets high marks from almost everyone for his determination to alter Iraqi political and economic fortunes, has come to believe that to have a chance at resolving the problems inside Iraq, he must play a role in helping to settle the problems around it. He may be onto something. Instability in Iraq’s neighborhood contributes to the country’s multiple problems—but does Baghdad have the influence, resources, and prestige to forge a more stable region? The Iraqi leader has some assets to work with here, mostly his own prestige and the relationships he fostered as the head of Iraq’s intelligence service between 2016 and 2020, but it remains unclear why the Saudis, Emiratis, or the Egyptians need Iraq’s help.

The first indication of the Iraqi government’s new and more constructive approach to the region actually predates the arrival of Kadhimi to the prime ministry. In the spring of 2019, Egypt, Jordan, and Iraq announced their intention to establish a mechanism for economic and geopolitical cooperation. At the time, few noticed and those who did tended to dismiss the effort as a project of the increasingly irrelevant. Iraq had struggled with myriad political and security problems since Operation Iraqi Freedom and had distant and difficult relations with other regional powers. Egypt had turned inward and demonstrated little capacity to shape events in the region beyond the Gaza Strip. And Jordan had lost ground in recent years as both the Trump administration and the Netanyahu government in Israel preferred dealing with the Saudis and Emiratis.

Two years and four leadership meetings later, the Iraqis, Egyptians, and Jordanians have agreed to build a pipeline from Basra to Aqaba with plans to extend it to Egypt, link up their electricity grids to reduce Iraq’s dependence on Iran, and provide Egyptian and Jordanian firms the opportunity to participate in Iraq’s reconstruction. As is often the case, what is laid out on paper may not materialize, but even if these plans are only partially realized, they are likely to accrue to the benefit of Iraqis.

There are also obvious political and geostrategic benefits of the tripartite relationship for Kadhimi and Iraq. At the most recent meeting among Egyptian, Iraqi, and Jordanian leaders in late June, the prime minister asserted that the Arab states sought to develop a “common vision through cooperation and coordination” to resolve the conflicts in Syria, Palestine, Libya, and Yemen. At first glance, that seems like a kind of throwaway line that leaders use to fill space and add gravitas to their talkfest but, in this context, it actually does mean something.

Kadhimi is suggesting that when power shifted to the Arab states of the Gulf about a decade ago, the regional security environment deteriorated. Iraq, Egypt, and Jordan are now ready to pick up the pieces and foster stability. It is no doubt a self-serving statement and not even entirely true. The Egyptians, for example, are complicit in the immiseration of Gaza, backed Khalifa Haftar’s war in Libya, and have quietly supported the Syrian regime. Not exactly a stabilizing force, but in the case of Iraq, Kadhimi has worked quietly to end the regional rivalries that have exacerbated both Iraq’s and the Middle East’s troubles.

Last spring, Middle East watchers got excited over reports that Baghdad was mediating between Saudi Arabia and Iran. The Iraqis also take credit for pushing reconciliation between Turkey and Egypt, and there are rumors that they are doing the same between Ankara and Abu Dhabi. Mitigating these regional rivalries would certainly benefit Yemenis, Palestinians, Libyans, and Syrians as well as Iraqis. But there is also an Iran dimension to this outreach. Kadhimi is smart enough to know that he cannot run the Iranians out of Iraq, so he needs to be more subtle.

Establishing strong ties with important regional powers like Egypt, Jordan, Turkey, Saudi Arabia, and the UAE provides him more depth and strength to pull Iraq out from under Iran without inviting Tehran’s mischief. The Iraqis are, of course, realistic. Iran is always going to be influential and have interests in Iraq, but by carving out a larger role for itself among Arab countries, Kadhimi has a better chance of establishing something akin to state-to-state ties with Iran rather than a relationship that looks more like subjugation.

What are Kadhimi’s chances for success? To start, give the Iraqi leader credit for trying. Iraq’s domestic problems are hard enough to resolve without the compounding pressure of regional problems. In late 2019, for example, Turkish airstrikes in northeast Syria sent tens of thousands of Syrian Kurds streaming into Iraq, adding to the country’s burdens. To the prime minister’s advantage, there seems to be some genuine interest in calming regional tensions, but here is the problem with declaring that “Iraq is back” and making Baghdad a centerpiece of U.S. policy in the region: How much can anyone attribute the willingness of Iranian, Saudi, Turkish, Emirati, or Egyptian leaders to de-escalate to Kadhimi’s efforts? Maybe they have decided for their own political and national interests that now is the time to pursue less conflictual policies.

Erdogan’s needlessly aggressive foreign policy over the last few years has left Turkey isolated in the Middle East and estranged from Ankara’s allies in Europe and the United States. Bad economic news and incompetence in handling disasters like COVID-19 and wildfires have buffeted the Turkish president politically. As a result, it seems like a propitious moment to seek better relations with Saudi Arabia, the UAE, and Egypt.

Consider, too, the Emiratis. They have signaled that they are no longer in the business of trying to shape the geopolitics of the region, pulling back from Libya and withdrawing forces from Yemen in favor of an emphasis on economic development. Emirati leaders in turn seem more open to a modus vivendi with both Iran and Turkey. When it comes to Saudi Arabia-Iran talks, it does not cost anything for the Saudis to meet the Iranians in Baghdad, and it may even provide a boost to Iraqi sovereignty, which is a net plus for the folks in Riyadh.

Still, for all of Prime Minister Kadhimi’s mediation efforts, the Egyptians and Turks still have not normalized their relations, despite expectations that they would do so in May or June. There continues to be no love lost between Turkish leaders and their Emirati counterparts. And the Saudis and Iranians remain wary adversaries, no closer it seems to re-establishing diplomatic ties than they were when word of Iraqi mediation leaked to the press.

Nevertheless, it is better for everyone that the Iraqi government wants to be helpful. While August in Baghdad is not everyone’s idea for a destination, the planned conclave could be an important step in replacing the despair of recent years with something that has been in short supply—hope.