Biden Could Midwife a New Iraq 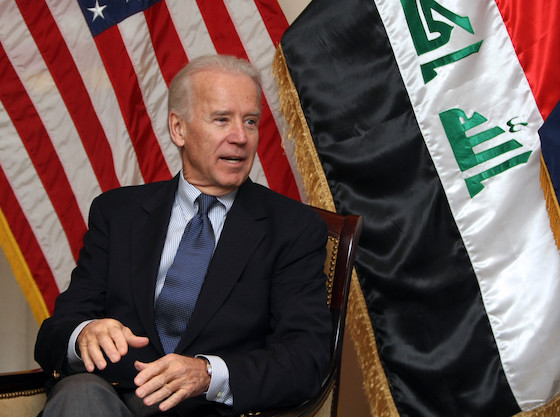 On June 17, after almost a decade of trying, the U.S. House of Representatives voted by a substantial bipartisan margin to repeal the 2002 Authorization for Use of Military Force (AUMF), which permitted the invasion of Iraq, the ouster of Saddam Hussein, and subsequent multiyear operations to stabilize the country. For some, the repeal (which still requires Senate action) will fulfill a long-sought desire to reduce commitments to an Iraq that they see as a lost cause. For others, it will be the final nail in the coffin of a feckless effort to transform Iraq into a functional and prosperous democracy.

Common as these beliefs may be, they do not reflect the reality on the ground. Repealing the AUMF is little more than a symbolic step—but Americans should be careful not to misinterpret its practical meaning. Iraq is not lost. At least not yet.

Neither the bravery of Iraq’s protesters seeking political and economic reform nor the gambits of the country’s handful of well-meaning leaders have righted Iraq’s course. Corruption is too pervasive. Iraq’s nominal allies are too capricious. And as always, Iran’s minions are too powerful, so much so that even the best of Iraq’s leaders, judges, soldiers, and police officers are frightened of personal retribution for merely doing their jobs. Outside actors—mostly in Iran, some in Turkey—are intent on ensuring that Iraqis always walk a tightrope, afraid a misstep will be their last, doubtful that even the promised safety nets will be there. The only entity that might conceivably turn Iraq around is the United States, but both the costs of COVID-19 and the pervasiveness of an Iraq-as-latter-day-Vietnam narrative seem likely to drain any appetite in the Biden administration to reinforce Iraq’s foundations.

Fortunately, the United States can count on Iraqis bearing most of the burden themselves. Indeed, the AUMF on its way to repeal is no longer relevant to the work needed of Washington in Iraq. Any necessary U.S. military operations would likely fall under the 2001 AUMF, which governs al Qaeda and thus the Islamic State and related groups. (No president has invoked the Iraq AUMF for operations in more than a decade.)

Rather, there is yet another path forward—patient, light-footed, and constant—that could mean a better Iraq for Iraqis and for the United States in the future. It would be an Iraq that could benefit the long-term bipartisan goal—as reflected in the push to repeal the AUMF—of ending the perennial U.S. wars in the Middle East and stabilizing or even neutralizing the region’s most entropic forces.

For its part, the Biden administration insists that it will not repeat either of its predecessors’ foreign-policy errors and that, on Iraq, it has learned the lesson that unilateral retreat is a mistake. Indeed, it was Joe Biden himself as Barack Obama’s vice president who oversaw the disastrous 2011 withdrawal that laid the groundwork for the rise of the Islamic State. And at the very least, it appears clear that Biden’s own administration doesn’t hope for a replay. As a result, Biden’s national security team has already taken some important steps to cooperate closely with Baghdad: The first Middle East leader that Biden called as president was Iraqi Prime Minister Mustafa al-Kadhimi, and the administration has already held a meeting of the U.S.-Iraq Strategic Dialogue in Washington, where Biden put in an appearance. Another session is already in the works.

These are good steps, but they are only a beginning. Winning the long game in Iraq comes down to three simple propositions: It means building up America’s influence over time to bolster U.S. leverage. It means weakening Iran in Iraq as much as possible to increase the cost of Iranian interference, eventually making it difficult to resist Iraqi, and eventually U.S., efforts to rebuff Iranian rule. And it means patiently waiting and taking advantage of opportunities—seizing them to strengthen indigenous Iraqi forces.

To make those propositions work, however, the United States has to be prepared to stay in the game. Iran has proved an ability to play even a weak hand well, but what has given Tehran that edge is that its agents come to work every day. Thus, the entire U.S. national security apparatus must steel itself to remain engaged in Iraq come what may, including whenever the United States inevitably loses tactical battles to Iran or corrupt Iraqis. At present, there are only a few thousand U.S. troops in country, virtually all of them training, advising, and providing logistical and intelligence support to the Iraqi security forces. Another contingent provides security for the rest, while only a tiny fraction supports direct action against the remnants of the Islamic State.

Since former U.S. President Donald Trump ordered the killing of Iranian paramilitary leader Qassem Suleimani and his principal Iraqi cat’s-paw, Abu Mahdi al-Muhandis, Iran has made it a priority to force U.S. troops out of Iraq. Yet it is clear that the ousting of U.S. troops is an Iranian, not an Iraqi, priority. Most Iraqis support U.S. troops remaining, whether because they see them as a path to a more professional Iraqi military or because they are viewed as a critical check on Iran’s free rein.

Except for Iran’s most servile lackeys, Iraqis uniformly suggest that rebranding the U.S. military mission is all they need to justify retaining it despite the Iraqi parliament’s vote to expel U.S. forces last year. This should be easy and even easier if the AUMF is ultimately repealed. It will mean stating that no U.S. troops have a combat mission in Iraq. It might also mean forgoing operations against the Islamic State from Iraqi soil, but that is a small price to pay. At this point, chasing down the dregs of the Islamic State can be the lowest priority for U.S. troops in Iraq given that terrorist organization’s currently fragmented and weak state.

What must become a higher priority for U.S. military forces, by contrast, is the basic protection of Iraqi political leaders. One of the hardest problems that well-intentioned Iraqi leaders like Kadhimi, President Barham Salih, and others have faced when trying to curtail corruption and the Iranian-backed militias is the threat of violent retaliation against them and their families. Iraqi security force commanders are under similar threat, aimed at dissuading them from discharging their constitutionally mandated responsibilities to protect the government, following legitimate orders, and arresting Iranian proxies or other criminals. Washington has assured Baghdad that it would provide military support—if requested—in precisely these instances. That is important, and that commitment needs to be resourced and maintained, but it is not enough.

Iraqi leaders’ need for protection isn’t an easy problem to solve. Because U.S. forces are not present in Iraq’s cities anymore, militias, criminals, and foreign proxies have a clearer path to strike independent politicians. Greater intelligence cooperation can always help (though the United States is already anteing up what it knows), but real progress may require a greater show of force by U.S. security forces and closer cooperation with Iraqi leaders. In Lebanon, leaders have been killed with impunity for decades without fear of justice or retribution, and that has consistently undermined any revival of democracy or the rule of law; the United States has an interest in ensuring this pattern is not repeated in Iraq.

One of the most useful ways that the United States could expand its outreach to Iraq and build on its comparative advantage is to put greater emphasis on economic ties. Iraqis routinely complain that the United States is too focused on security issues and not enough on economic matters. Washington provides almost half a billion dollars annually in various forms of assistance critical to Iraqi defense and development. But Iraqis also want more trade, technical expertise, and other forms of purely economic aid. In short, many seek not handouts but deeper economic engagement, and there are numerous ways the United States could show that it recognizes this.

For instance, although the current strategic dialogue between Washington and Baghdad includes economic considerations, the name implies a security preoccupation. One easy fix would be to hive off the economic elements into a separate “U.S.-Iraq Economic Dialogue.” More useful still would be to create a standing U.S.-Iraq Joint Commission on Economic Cooperation modeled on the U.S.-Saudi committee of the same name. The latter was established in the 1970s to enable American economic and financial experts to help Riyadh effectively use its oil wealth to modernize. The money was all Saudi; what the United States brought was its know-how, its connections, and its integrity. The commission was instrumental in building roads, airports, factories, petrochemical facilities, and even entire cities like Yanbu and Jubayl.

It would be up to the Iraqi government to bring project proposals to such a Joint Commission on Economic Cooperation. From the U.S. perspective, the ideal system would simply require all projects referred to the Joint Commission to comply with American anti-corruption regulations.

Finally, the United States must overcome its usual reticence in managing democratic backsliding among aid recipients and allies and aggressively call out Iraqi violations of democratic norms. The United States midwifed Iraqi democracy, such as it is, and cannot wholly abdicate its responsibility. Indeed, one of America’s worst moments came in 2010, when Washington failed to call out the theft of Iraq’s national elections. The catastrophic slide of Iraqi politics into renewed sectarian civil war in 2014 was in part an outcome of that mistake.

Washington’s historic role still carries weight with Iraq’s public and politicians. The United States should also be willing to suspend various forms of economic and diplomatic support when Iraqi leaders undermine their own democracy. By the same token, when Iraq takes positive steps that foster good governance, the United States should stand ready to increase aid, even by small amounts. Iraqis need to believe that taking the risks to do the right things will be recognized and rewarded, especially by the United States.

All of this together can slow Iraq’s decline, but it is unlikely to reverse it. As has remained true over the last 18 years, Iraq has the elements of a workable democratic state and a prosperous economy. American mistakes and Iranian malevolence have made those goals far more difficult to reach. But they are not unattainable if the United States works with honorable Iraqis to steady its course forward.

This may not seem a rousing call to arms, but it is a realistic path forward through the difficult circumstances that the United States and its Iraqi allies now find themselves in. More importantly, it will advance the Middle East to a place where military intervention is not the sole hope for freedom and prosperity.